Went out and got my new machine last night at Sears (for far less money that the Amazon link, by the way).  She's very pretty - with red accents where the green in the photo above is.  Haven't played with her yet as I think Tom gave me his cold and I'm feeling pretty out of it.  I did do a basic test out of the box last night and she seems very fast and very quiet.
Still working on a name.

It also occurs to me that between the pearls and the sewing machine, I'm turning into a latter-day, foul-mouthed June Cleaver.  Awesome!

Also thinking of picking up a good intro to sewing book.  I have a few ideas, but if any of you clever readers have suggestions, I'd love to see them.
Posted by Unknown at 5:51 PM 1 comment:

It's one of those vaguely important ones - I'm 30.  This might explain me running around being annoying.
Tom bought me a beautiful string of vintage pearls and a chocolate bunneh.  Awesome!  My husband, aka GIGAMESH (long story), rocks!
And I have birthday money burning a hole in my pocket for new a low-end sewing machine to augment Betsy my vintage workhorse who, while awesome, does only straight stitches, and yarn and fabric. 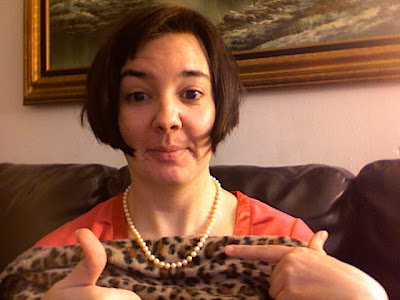 Pearls as they are meant to be worn - with jammies and a Snuggie.  Hells, yeah!
I should shower and get out of my jammies at some point today, but who knows when.  Hoping to spend the day knitting and nibbling on the chocolate rabbit.
I also get to start my Plaquenil today, finally, after all the nonsense over getting my insurance to cover it. It usually takes several weeks or months to make a significant difference in symptoms, but here's hoping it helps with some of my fatigue and arthritis and skin crap.  Also hoping it doesn't make me want to puke.  You're supposed to spend your 21st birthday dangling over a toilet, not your 30th.  :P
Posted by Unknown at 8:54 AM 3 comments: 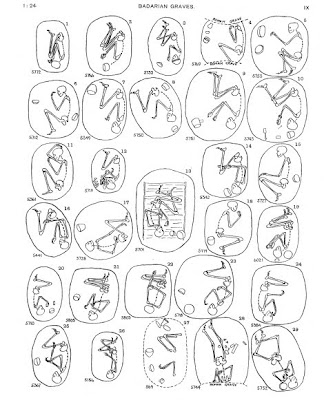 Lots of sketches of Badarian graves. I love these for some reason.
I'm having a bit of trouble saying anything definite regarding male/female/juvenile differences in graves without going back through Brunton's publications and doing full tallies (and while I love you people, I don't love you that much). If I can trust some old notes of mine and some syntheses by other people, it looks as though male burials were typically “ richer” with more stuff in general and more jewelry type things in particular, especially these lovely belts of multiple strands of glazed steatite beads. A few people had female figurines buried with them – including in one case a young boy who had a figurine stuck in a pot that was then stuck in a larger pot. Interesting, if one interprets the figurines as fertility figures (which is how they're ALWAYS interpreted) why a little boy needs one in his grave. The other figurines, sadly, were from disturbed graves without skeletal remains so we can't speculate much further based on those contexts. 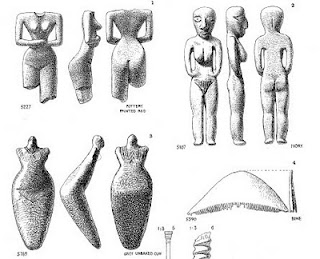 Drawing of all the figurines. Extra Hawt.
Amusingly, the more I write in this area, as I mentioned earlier, the more unanswered questions I find and the more stuff I find that “someone should do” - like going back through Brunton's publications and taking a closer look at the age/sex profiles and the grave assemblages. Assuming someone hasn't already and I just missed it.
And now, though this comes from a slightly later context, one of the most WTF published (and that is an important distinction) field photos I've seen. I'm guessing they did this to show the scale? Or so they'd remember those pots were used in a burial when they developed the film? Or because they were bored? 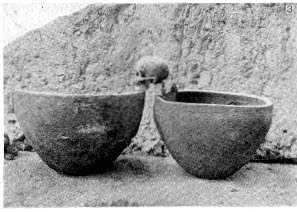 ETA:  Take a close look at the positions of the skeletons in the grave sketches.  I find some of them hilarious - the one of the lower right looks like me falling into bed after a long day.
Posted by Unknown at 10:14 PM 4 comments: Mr. Spock Season One Beer Koozie
Originally uploaded by lizzylaws
Lizzylaws has created a fabulous beer (or other bottle) cozy based on the Star Trek uniforms from Season 1 of the original series.
I love the details - the rank stripe, the delta-shield insignia with the science device.
Super nifty.

Even better, she's offering it as a finished object in her Etsy shop, LizardKnits or for the knitting-abled, as a pattern for sale on Ravelry.

Given my fondness for Star Trek, knitting, and root beer and ginger beer, I am an enormous fan!
You can find out more at her blog, too!
Posted by Unknown at 10:34 PM 1 comment:

I hope people have enjoyed the random snark etc and I hope the community gets bigger and I can keep being at least mildly entertaining and occasionally useful.


If you can not be kind, at least have the decency to be vague (extra super long ellipses of spammy linkage redacted)

Hopefully will get some more posts up this week.  Health suckage continues - my neck and head are still creating problems and I'm having an especially annoying run of cognitive weirdness with dropping words, forgetting words, etc.  And my arthritis and Reynaud's are flaring again, along with general hand tremors and muscle spasms.  Have also been having a jolly time trying to get a prescription filled that my insurance doesn't usually cover and trying to get new CPAP supplies while dealing with the above.  Such fun. All that and trying to do basic household chores and have a shower now and then has left me pretty tired.
But at least I have my dignity. ;)
Posted by Unknown at 2:50 PM 1 comment:

A stunning example of the finest of Egyptian carving from the Seti Temple at Abydos: 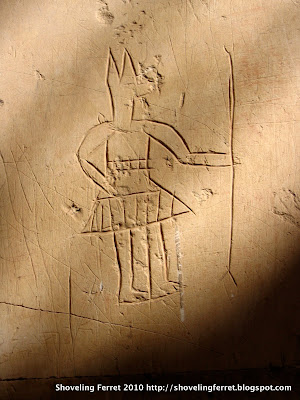 Before anyone freaks out, this is on a modern reconstruction block.  I'm seriously impressed by the detail here - I think that's actually a fairly decent rendering of a was scepter or possibly a very long barbeque skewer that Anubis or maybe Wepwawet is holding.
Anyway, no longer post this week as I am having some fairly sucktastic symptom flare ups this week.  My neck is seriously messed up and making my head hurt badly enough to make concentration more of a challenge than usual and my hands are starting to get hurty again.  And I had several appointments and running around today trying to get a prescription filled and finding out it's not in the formulary and trying to get the refusal over-ridden and...yeah...  Anyway, hopefully I'll get my drugs soon and they'll help.
Hopefully we'll get back on track next week with more extensive Egyptological snarkery.
Posted by Unknown at 7:55 PM 2 comments:

Visit to the MSI part 2 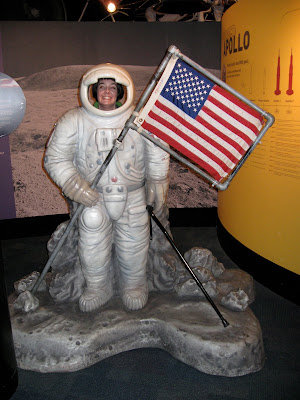 Here I am, the first cripple on the moon. Bonus points to Chip for suggesting the cane needed to be in the photo and placing it so well. 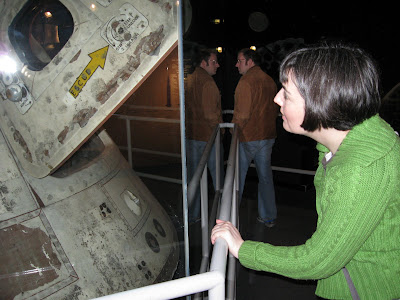 Here I am fascinated by the Apollo 8
command module.  Chip has managed to clone himself in the background. 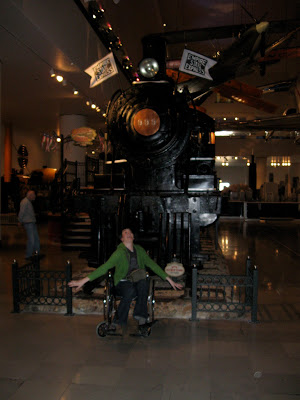 Midway through I decided I needed a wheelchair, especially since we had walked to the museum and were going to have to walk home.  They left me in front of the oncoming train.  (Actually, there was an older lady also in a wheelchair who looked utterly scandalized when we took this photo.  Seriously, lady, if I have to use the damn thing, you can be sure I'm going to joke about it.)

Later in the trip, we arranged for someone to bust out the passenger window of Chip's car and steal some of his stuff, just so his Chicago experience would be authentic. We are excellent hosts.
Posted by Unknown at 4:31 PM 2 comments:

Visit to the MSI part 1 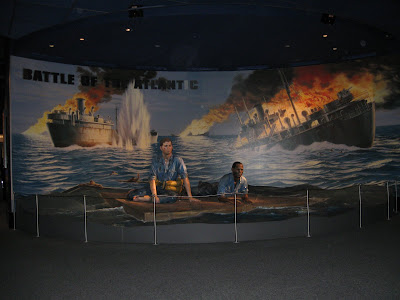 Our friend Chip was in town last week. Tom and I took him to the Museum of Science and Industry.

They have a captured German U-Boat as part of their collection. This thing to the right is from the lead-in to that exhibit. The dude on the left looks very pouty about having his ship sunk. 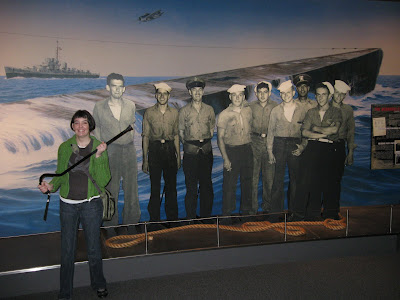 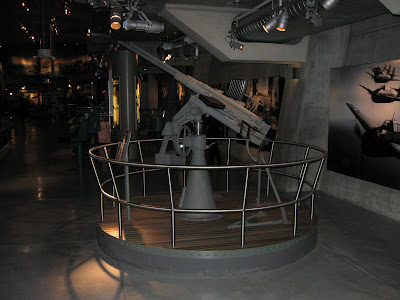 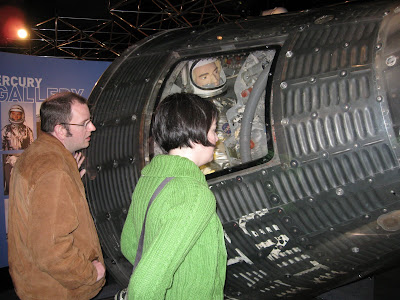 Further on, you can see the boarding party that took the sub. My cane
was an essential part of this mission.
It's a really big gun.


The Aurora 7 Mercury capsule (Scott Carpenter's ship).  Damn those things were tiny.  Also, they had lots of switches.

Breaking News: New Evidence the Moon Is Made of Cheese 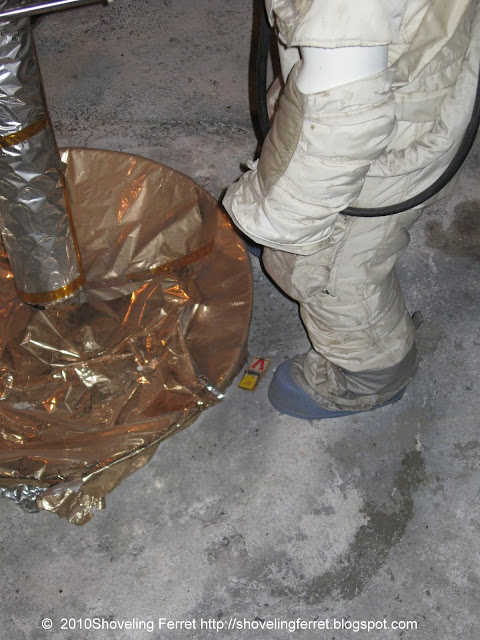 Why else would astronauts have to leave mousetraps near the LM pads? TEACH THE CONTROVERSY!!!!

Posted by Unknown at 2:06 PM No comments:

1.  If someone invents a time machine and I go back to ancient Egypt, scribes better watch out. I will be pimp-slapping every last one of those bastards.
2.  Claim Europe.
3.  Print this out and take a copy to Charles Darwin.  For the lulz.
4.  Find the Trolololo guy and kill him.  With extreme prejudice.  Seriously, Soviet Russia, what the hell?  Why on Earth didn't they weaponize this guy and his creepy smiley-ness?  The fact that he reminds me vividly of someone I went to grad school with doesn't help.  Also not helping:  Tom and Chip breaking out into the song randomly.  Sigh.
Posted by Unknown at 5:22 PM 2 comments:

Dead, frozen fish and other joys of visiting

No, really.  I took Chip to see a dead frozen fish.  I have pictures.  I contemplated spearing the fish out of the pond with the ice pick on my cane, but decided that was a bit too ghoulish even for me. 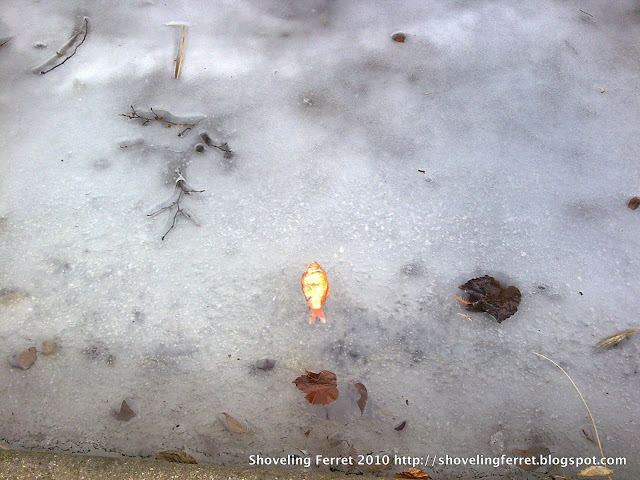 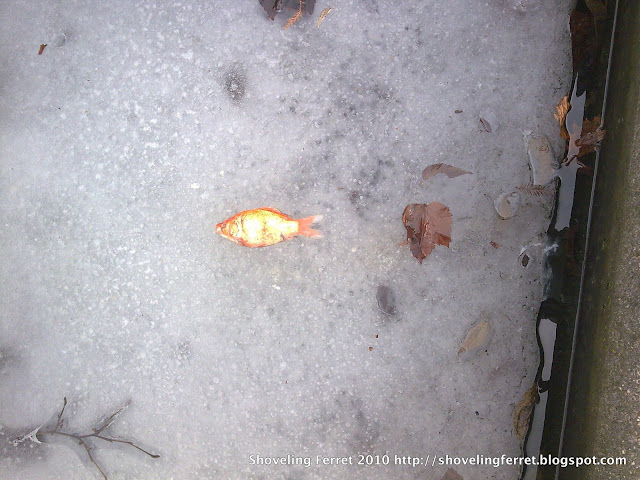 We went and checked out the OI too.  And we've developed a new theory to describe some of the lamer looking animal models - ancient summer camp.  I'm pretty sure those lopsided, messed-up looking sheep and goats and people and crap used to have macaroni and glitter glued to them too.
We also saw an undergrad on the bus with awesome metal-band big hair.  No foreskin restoration man or Greenpeace dorks today, though.  So much for local color.
Posted by Unknown at 3:28 PM No comments: Merrick, The Elephant Man
Originally uploaded by MrFoxyy
Very cool amigurumi of John Merrick. Interesting topic, and another example of the very interesting mouth technique that Mr Fox has demonstrated with other pieces, like Mr. Bunnyford, one of the ultimate marriages of cute and nightmarish I've seen.

Patterns and finished items available at Mr. Foxy's Toy Emporium.
Posted by Unknown at 4:12 AM No comments:

Welcome to the Egyptology News Readers

Andie over at Egyptology News was kind enough to post the links to my Tut commentaries last week!  Page views jumped quite a bit, which is always nice to see.  So, welcome to any and all of you who have clicked over and decided to linger.  There is much snarky fun to be had here, I hope.

And a big thanks to Andie for being kind enough to post those links!   Egyptology News is a superb source of general news articles, gossip, recent publications, dig news, and all sorts of other fun stuff.  Very worth reading regularly.  Plus, Andie is also an Egyptologist/archaeologist, so it is therefore extra awesome.
Posted by Unknown at 1:48 AM 1 comment:

This is Alwen's fault, by the way.

At first, the Sea Peoples were all:

But then Ramses III was all:

Original images courtesy of Wikimedia Commons.  Both are from the mortuary temple of Ramses III aka Medinet Habu.
Posted by Unknown at 10:39 PM 2 comments: