I've branched out from only using Instant Play from Netflix (and thus having DVDs sitting around unwatched for weeks) and have actually been watching DVDs. Yesterday I got Star Trek: The Animated Series.
I read the novelization of the episodes years ago, but had never seen the actual show.
Oh, it's awesome.
All the cast except Walter Koenig (Chekov) play their roles.
The music sounds like it's from The Love Boat.
The animation is at times hilariously bad.
But it's Star Trek and I love it.

Today I watched the episode Yesteryear. It involves adult Spock going back in time to rescue himself as a child from being eaten by a green scaly mountain lion. This was always one of my favorite stories.
I was knitting (in the round with DPNs, no less) while this was on so didn't see all of it so much as listen and glance up every now and then.
One of the things I glanced up to see was this: 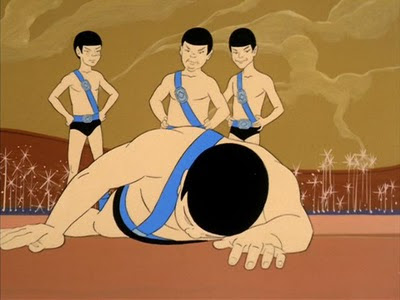 Why are male Vulcan children typically (?) dressed in Speedos and pageant ribbons? It's a freakin' desert planet. Wouldn't there be unfortunate burns and chafing? Also, that chubby one better watch his back before the other bullies turn on him.  And do I want to know what the girls wear?
I realize it was the 70s, but seriously - who decided on this outfit?  Was it a nod the tradition of dressing females on the show in as little as possible?  More shopping at Intergalactic Disco Pimps R Us?
It really is a cool episode.  We get a bit of back story for Spock and his childhood, including seeing his pet sehlat.
Still disturbed by the outfits.

Hey, there's a very interesting discussion on Psychogenic vs. Organic disorder's on this neurologists blog.

You can read it here: