Zafu Pinning and When Did I Start Getting Old

Today I finally got around to working on the zafu some more. After careful deliberation, I pretty much decided that the numbers and weirdness from the PDF pattern I had were worthless and decided to mostly wing it. Today I tried to start pinning the circles to the pleated sidewall bit. And broke my brain.
So, I started whimpering online. But, Alwen came to the rescue! Yay! I've got at least one of the damned circles pinned. I had to take a break as my back decided to start being all "Biznatch, I *know* you aren't going to make me stand up or sit and work after days of that stupid video game and walking." So, I made a cup of tea and settled back on the couch with heating pad after taking pictures of the pinned zafu and then loosing the camera and wandering around the apartment looking for it like a fool.


And then my Mom called from my nephew's graduation party. Who let him turn 18? He's joining the Army! And he sounds *just like my Dad*! Plus, he's huge - entirely too big to be taken down with a well-aimed cane swipe. What is this?!? I'm not grown up! Who let him be!?!


Anyway, pinning the zafu drove home an important point. A lot of things start to make a lot more sense once you actually start doing them than they do when you're staring at them and then at directions trying to make sense of them. It also drove home the important point that without the internet I would probably be in a corner covered in fabric and pins rocking back and forth in the fetal position. 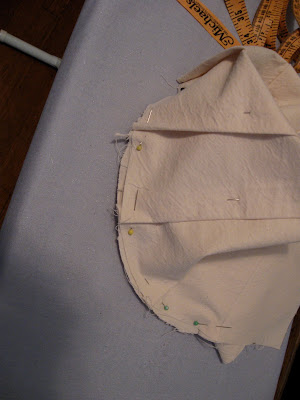 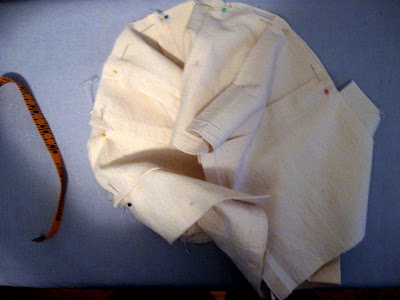 And on a side note - that damn flying bird game on Wii Fit Plus can suck gangrenous donkey balls. And that stupid thing is going to say I'm 40 until I actually *am* 40. And my hips and back and shoulders hurt. Stupid freakin' being healthy...

By George, she's got it!

Meanwhile, my own notes are full of little drawings.

The pictures in my PDF sucked. I had no idea how to go from nice, pleated side and circles to magically pinned together-ness. Especially since it said to pin *both* circles before sewing and I was all like "do what now?"