Supposedly a good way to deal with doggies who are frightened by thunderstorms is not to comfort or soothe them because that reinforces the idea that something is wrong or that they should be afraid.  Instead, you should try to distract them by playing or something.

I just tried to get Oreo to play with one of his tugs and got the look of utter doggy disdain.  The expression that clearly says "Woman, what the hell is wrong with you?  There is a freakin' THUNDERMONSTER right outside and you taunt me with that stupid toy thing?"

Just a few minutes prior he was trying to claw his way into the bathroom with me.  If I hadn't already been in there, he may well have been trying to herd me in there because, apparently, he is aware that bathrooms are often the safest rooms in the event of thunderstorms or tornadoes.  He regularly tries to get me into the bathroom during storms.  The very same dog who occasionally runs to the wrong door of the apartment when Tom comes home and who still has trouble grasping the idea of looking at what you're pointing at instead of at your finger is somehow conversant with basic emergency procedure.

I pointed out to him that I don't understand why he always comes to me when there's a storm.  Tom is much bigger and therefore likely better protection.  For once he listened to me: 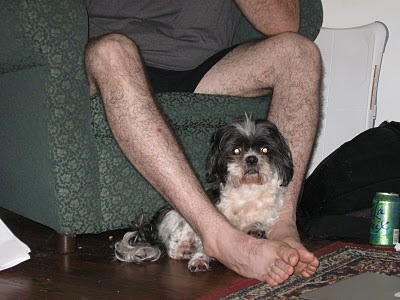 Notice the paw carefully placed over one of Tom's feet so as to keep the protective shin fence in place.  Also, he looks extra pitiful.  And keeps looking at the door uneasily now and then.

Thundermonsters:  serious business.  Water falling from the sky and leaving puddles in which I could DROWN:  also serious business.
It's going to be a hard night for a little dog.  And probably for me too because odds are he's going to wind up sleeping on my CPAP hose trying to get as close to me as possible.
Posted by Unknown at 11:42 PM

The storm system came across the lake later. Black dog Truffles was okay until it really started flashing and growling at her, then she put her feet on the bed and panted into my face.

Seriously, dog, I would turn these rain-lashing, wind-howling, black and white window-rattling storms down if I could!